MacKay kicks off its first noon hour Jazz in June concert this Thursday June 6 with Tom Reynolds (piano) and Peter Woods (saxaphone) playing “Ellington’s Songs of Life and Faith”.  See you on Thursday! 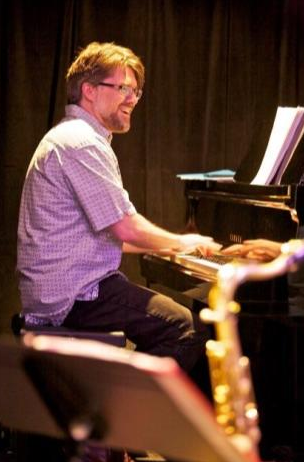 EYNOLDS grew up in Chicago. Moving to Nashville after his university days, he had the good fortune of performing with outstanding musicians throughout the mid ‘90s.

He worked as Music Director and toured with Grammy-winning jazz vocal group “Take Six” which included an HBO ‘House of Blues’ special, and appearances on both ‘The Tonight Show’ and ‘The Today Show’ on NBC. He also toured extensively as Music Director for Engelbert Humperdinck and performed and toured with country artists including Shania Twain, Shelby Lynn, Crystal Gayle, and Ty Hernon, as well as with R&B artists Max Carl (from ’38 Special’) and Glen Frey (of ‘The Eagles’). While in Nashville, he also performed on the jazz scene with artists including Jeff Coffin (saxophonist with Dave Matthews), Bela Fleck, Victor Wooten, Kirk Whalum, and Chester Thompson (drummer from ‘Genesis’).

Living in Toronto since 2007, Reynolds has been a regular in the studios and jazz clubs, and in 2010 recorded with his trio, including bassist George Koller and drummer Lorne Nehring. They perform regularly at St. Andrew’s United Church and locally around Toronto. He is a member of ‘In Orbit’ with Jeff Coffin, Felix Pastorius, and Canadian musicians Michael Occhipinti (guitar) and drummer Davide Direnzo, recently releasing their first recording and touring North America. Tom has also performed with Jim McCarty (drummer for ‘Yardbirds’) and occasionally with acclaimed vocalist Jackie Richardson.